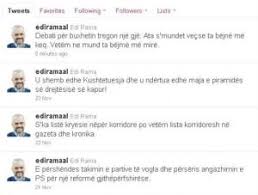 Tirana, 25 November, NOA - From Brussels, where is for an official visit, chairman of the Socialist Party, Edi Rama has again found a way to give a message for his rival political, Sali Berisha, about the budget debate.

Rama responded from his profile on the social network Twitter for debate on the budget and financial project submitted by the majority.

"The debate on the budget shows one thing: They can only make worse. Only we can do it better,"says Rama on Twitter....